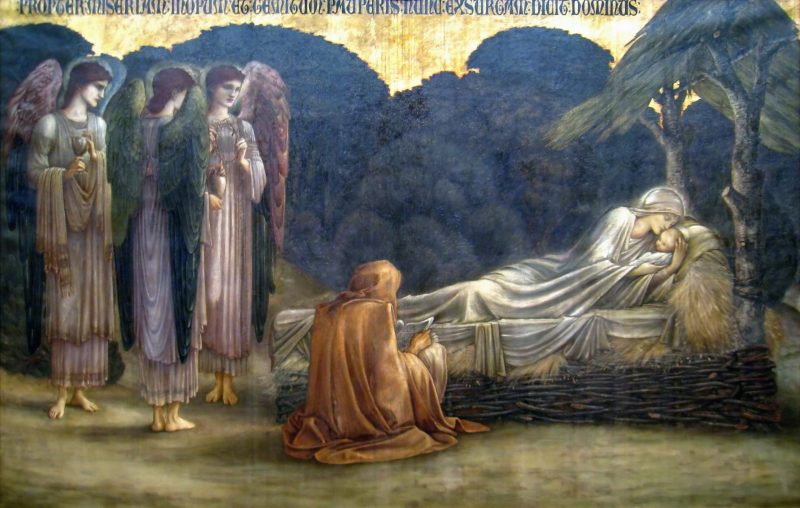 In just a few days, when we all gather at our parishes to celebrate Christmas Mass, we will do something we only do once each year –  genuflect as we recite these words of the Creed…

“…by the Holy Spirit [he] was incarnate of the Virgin Mary,
and became man”

The phrase alludes to a presence that preexisted the birth of Christ. We first encounter this Word, who came to be named Jesus, in the creation story in the first chapter of the book of Genesis. The text says that God “spoke”, and all came into being. The making of all of creation – all being – was brought into existence at, and by God’s Word. In the fullness of time, this powerful creative God became a tiny child and entered the world of men through the immaculate womb of the Blessed Virgin Mary – and the Word became salvation.

The power of the Godhead resides in this Word who is the Second Person of the Holy Trinity. The first chapter of the Gospel of John, whence these words of the Creed are taken (and all quotes not cited in this post), says that “All things were made by Him, and without Him nothing was made,” and “in Him was life, and the life was the light of men.” What an incredible thought to ponder when pondered in the context of his name, Word. God’s Word is creation and life.

Human speech has been given profound dignity by the Second Person of the Holy Trinity. Language is ours so that we might share in God’s creative nature. However, used unwisely, it can also destroy: “A man who bears false witness against his neighbor is like a war club, or a sword, or a sharp arrow” (Prov 25:18), or “whoever says, ‘You fool!” shall be liable to the hell of fire” (Matthew 5:22). As Christians trying to live a virtuous life, we must learn to be honest and prudent in our speech – to mean what we say and to say what we mean.

Language was given to us for good – to proclaim the Evangelium – the good news of God’s creative being so that it can be set loose in the souls of others to create in them another image of Christ.

In just a few days we will celebrate the great feast of the Incarnation – Christmas. Jesus came to dwell among us to show us the WAY to the Father. It is the power of his Word that teaches us to live in virtue and to season our speech with “salt” so that our conversations are always full of grace. (Col 4:6)

Unfortunately, we are living at a time when language is too often used as a weapon rather than an instrument of God’s grace. During this rancorous time, Christmas reminds us of what is truly real: The WORD who was “made flesh”; What is really TRUE: He was “full of grace and truth”; and, what brings us LIFE: “In him was life, and the life was the light of man.”

There has never been a more critical time for schools like the Regina Academies. The Incarnation is the foundation of our curriculum. Words are important to us and we teach our students to be skilled and prudent in their understanding and use of language. They learn that language has been ennobled by the incarnation and is a gift to be used to cultivate virtue, engage in honest debate, understand the profound reality of what it means to be created in God’s image, to communicate those truths lovingly to others, to build up the Body of Christ and to bring the power of truth to the world. They also learn to be wise and discerning of the contradictions and deceptive rhetoric that surrounds contemporary issues threatening religious freedom, human dignity, and the social order.

Our schools, and all of our students and their families have been placed under the protection of Mary, our Regina. It is she who guides us to her divine Son who is indeed the Way, the Truth, and the Life. She is our mother who protects us under her sacred mantle, just as she did Jesus so many years ago. Through her yes to God, she teaches us the value of saying yes to her Son, Jesus. Through her flesh given to Jesus in the incarnation, we know our dignity as human persons, and also that Truth is not an abstract concept but a person, the Son of Mary, the Son of God in whom the fulness of the godhead resides. Through Mary “we have beheld his glory, glory as of the only Son from the Father.”

Our prayer, dear friends and families, is that at the end of this very difficult year (and as we prepare for the year ahead) that you are refreshed in this Christmas season by contemplating the true peace and the blessing that comes to us from the womb of the Blessed Virgin Mary. We pray that he will be our guide in times of darkness as we look upon “The true light that enlightens every man… [who gives us] power to become children of God.”

We thank you for your trust, and for your support of the Regina Academies. Oremus pro invicem – let us pray for one another.

“The Word was made flesh, and dwell[s] among us.”