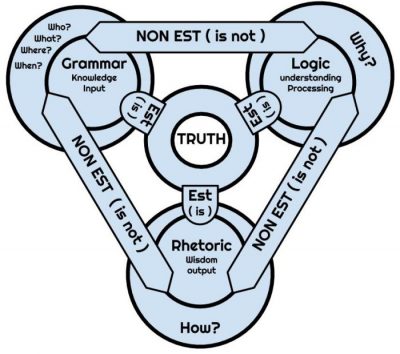 To some, classical education seems to have its own language. We talk about memetic teaching, paideia and the liberal arts, and of course that favorite of all words… “trivium”.

The “trivium” is a hallmark of classical schools, and in many ways it establishes our classical bona fides. To follow the trivium is to acknowledge the importance of human nature in education, and to support children in the natural progress of their intellectual development.

Trivium literally means, “the three ways,” and it is the organizing principle of a classical education. Those three ways outline the the natural developmental stages of children into young adults. They are:

For millennia, the trivium has remained the most effective structure for educational success. It prepares students for lifelong learning because if provides the tools necessary to become self-learners. It orders the mind to approach all things logically, and even more it enables individuals to grasp the context of ideas, and to progressively and systematically grow in knowledge and wisdom so they can express themselves fully and articulately as they grow into adulthood and assume responsibilities to God and neighbor.

Each of the three stages of the trivium ensures that students receive the appropriate education at just the right time.

Learn more about our Curriculum

Young children are inspired by their natural wonder to make sense of the world around them. They are interested in the who, what, where, and when of subjects. They respond to the rhythm of nursery rhymes and delight in reciting them, and they gravitate to concrete facts like math facts, and rules of spelling, grammar, and phonics. Their young minds have an incredible capacity to store up facts.

The grammar stage roughly coincides with the elementary years of education. It is not a time for abstraction. It is a time to build a solid catalog of basic skills that will provide the foundational skills used later for more complex subjects. The pedagogical approach involves memorization and recitation so that basic skills become second nature.

One of the downfalls of modern education is that it pushes children too soon to grapple with abstraction, and often pushes them to express themselves beyond their capacity at the expense of formation in basic skills. Understanding is not the goal of the grammar stage. Inspiring wonder in the natural world and teaching young children to calculate, to spell, to read, and to write has to come first.

The dialectic stage, sometimes called the logic stage, is when children first begin to look for connections between facts and subjects. They move from the concrete to the analytical, and it is the ideal time to teach students to reason well.

Parents of middle school aged children know that at a certain point in their child’s development they begin to question everything. They become argumentative, but argumentation can be a good thing (respectfully, of course) if it challenges children to prove themselves and their positions. As difficult as this time can be, it is critical that students are allowed to challenge, and are challenged in return to think beyond their emotion with reason and ordered thought.

While children in the grammar stage want to know WHAT happened. Students in the dialectic stage ask WHY it happened.

This is a critical time in the development of a young person’s faith. Research has shown that many young people have made the decision to disassociate themselves from religion by the time they are 13 – near the end of the dialectic stage. They often claim that they did not receive sufficient answers to their questions, or to what others may be telling them are contradictions between science and faith. Some claim to disagree with the Church’s moral position on matters of sexual morality with little explanation of the reasonableness of the Church’s moral teaching that is fundamentally rooted in the natural moral law.

Schools and parents must work together to guide students through this time of questioning, arguing, and debating important issues that could have life-long consequences.

Dialectic is the art of investigating or discussing the truth of options. Pedagogically, the manner of teaching in classical schools changes during this time to involve more discussion and less rote memorization. In discussion, students are encouraged to question, and they are challenged in return by their teachers and peers to justify their position in order to expose flaws in their reasoning.

The rhetoric stage roughly coincides with the high school years and continues on through college. It is the time when students who have been classically formed have a strong grasp of the fundamentals of language and basic facts, understand the relatedness and context of various subjects, and have been challenged to abstraction of thought and logical debate. They are ready to bring all of these skills together to make the mental leap into the hypothetical, the theoretical, and the spiritual.

There are seven liberal arts, and the four that are not a part of the trivium are called the quadrivium. They are astronomy, arithmetic, geometry, and music. The quadrivium is beyond the topic of this post, but in the ancient world, the quadrivium comprised the numerical arts. We communicate with one another as humans with words, but we understand the natural order through number and quantity.

Students in the rhetoric stage continue studies in the humanities, but their preparation in basic skill in math and science allow them to pursue advanced study in these topics to come to a greater understanding and appreciation of the interrelatedness of creation.

In the classical world of ancient Greece, the study of the quadrivium had a practical usefulness, but for the liberati, the freemen, the study of the subjects of the quadrivium were related to a greater understanding of the ordering of the soul, the highest of all pursuits. Of course, the classical understanding of the soul is not the same as what we believe as Christians, but the principle still applies. Classical learning is oriented to truth, and God is found in truth.

A Catholic classical education, rooted in the incarnation, is ordered toward truth in all things. Through the study of the traditional liberal arts, students learn who God is as he has been revealed in creation and the mystery of humanity created in his image. Just as it was in the ancient world, a classical education is still an education that will make all free.

Image: The Trivium borrowed from https://norseforcenewsreal.wordpress.com/trivium-thinking/trivium/

The Hallmarks of the Regina Academies

Patriotism, A Hallmark of a Regina Education