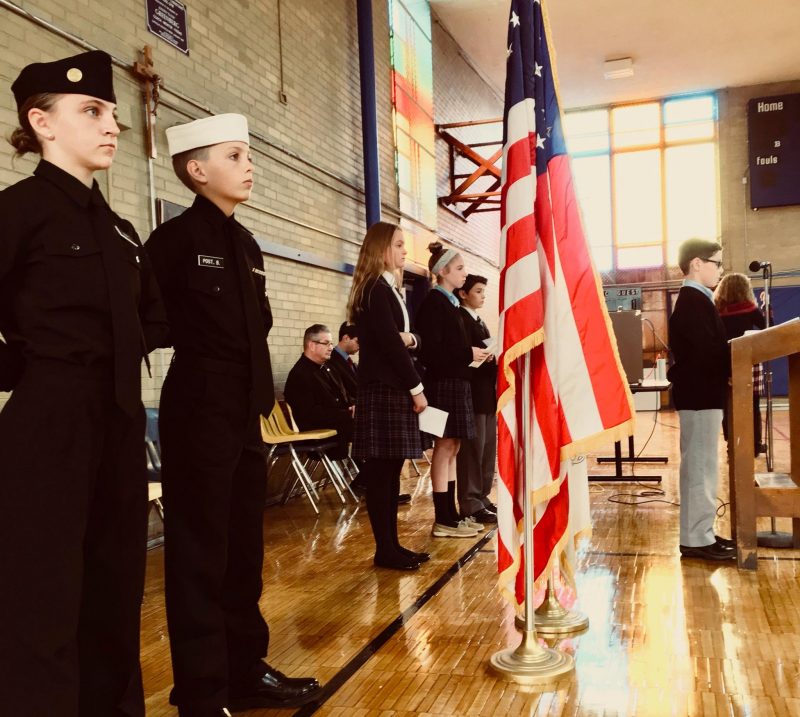 There is a beautiful verse in the well-known Marian hymn, Immaculate Mary, that says:

We pray for our Mother, the Church upon earth,
And bless, Holy Mary, the land of our birth.

These two lines of verse express two important virtues, piety and patriotism, that are challenging to understand and to practice in our modern day; however, they are important corollaries of the cardinal virtue of justice.

Patriotism has political connotations in the U.S. and not all of them positive, but that is a reductive view of a virtue that is essential for a well-ordered society. Patriotism is one of the hallmarks of a Regina education specifically because of its relationship to the cardinal virtue of justice. As the Catechism of the Catholic Church states in its discussion of the fourth commandment, the commandment to honor our father and mother:

The love and service of one’s country follow from the duty of gratitude and belong to the order of charity.

So, according to Catholic teaching, patriotism is not an option, it is a duty.

To be American is not only to reside in America. It is to adhere to a set of values and beliefs formed by history and culture. The founding of America has often been called an “experiment” because it of its uniqueness. American character was framed by our colonial past and founding belief that our inalienable human rights come from God and not the state.

Patriotism, stemming from justice, always seeks the mean between selfishness and selflessness in our relationships with our fellow citizens. It defines our obligation to work for the common good and to preserve certain freedoms for all people as a fundamental human right, or as the Declaration of Independence innumerates: The right to life, liberty, and the pursuit of happiness. The “just man” in Sacred Scripture is known by his conduct toward his neighbor (see Psalm 106:3).  The Christian life informs and guides our patriotic duty.

At the Regina Academies, our desire for our students is that they will be patriots who love their country but love with true charity, willing to make sacrifices for the good of another. Catholic social teaching provides the template for our students’ formation in justice, and therefore our hallmark of patriotism. It is drawn from the teachings of popes, beginning with Leo XIII who in his 1891 encyclical, Rerum Novarum, defended the working class and spoke out against the main tenants of socialism, but also against unrestricted capitalism that allows profit to take precedence over people.

Why the Regina Academies?

A partnership with parents

The Regina Academies have promised a partnership with parents in the formation of children in faith and reason. School and family work together to provide opportunities to form children in virtue, and virtue disposes us to good habits and to communion with God. As the Catechism of the Catholic Church states,

Human virtues acquired by education, by deliberate acts and by a perseverance ever renewed in repeated efforts are purified and elevated by divine grace. With God’s help, they forge character and give facility in the practice of the good.

To reject patriotism as a civic virtue and harbor hatred for one’s country is a violation of the fourth commandment. To revise history, as is increasingly common in schools as an attempt to correct past injustices and undermine national pride, is to deceive children about their past and is an injustice in itself.

As already stated, patriotism is not blind to injustice. Quite the contrary. As a parent knows their child’s faults and corrects them out of love when they stray, piety allows us to love the Church while regretting the failures of some of its members. Catholics cannot be blind to injustice within society, but they must love their homeland, and that love must inspire efforts to work peacefully toward the universal good of all citizens.

Patriotism is a hallmark of the Regina Academies because our desire for all of our students is that they grow in virtue and love their country by fulfilling their obligations to God first, and then to one another as justice demands.

Holy Mary, we pray for our mother the Church that we might serve her in true piety. We pray, too, for our country. May we have the courage to always pursue what is right and just for all people.

Mary, Our Queen, grant us a greater love for both, that in serving God and country we may bring justice to all and true peace to the world.

The WHY of Classical Education