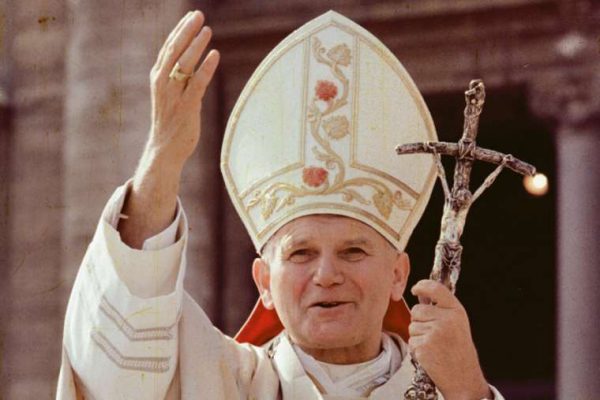 St. John Paul II began the 13th of his 14 encyclical letters, Fides et Ratio (Faith and Reason) with a beautiful image of the importance of both faith and reason in humanity’s quest for truth. He said that:

“Faith and reason are like two wings upon which the human spirit rises to the contemplation of truth; and God has placed in the human heart the desire to know the truth — in a word, to know himself — so that by knowing and loving God, men and women can come to the fullness of the truth about themselves”.

The Regina Academies intentionally adopted the tagline, “A Joyful Exploration of Faith and Reason”.  Some might be tempted to prioritize faith, or others reason, but St. John Paul II reaffirmed the Catholic belief that the two must exist together if one is to come to the fullness of truth.

Faith without reason leads to superstition, and reason without faith to nihilism and rationalism.

The Regina Academies challenge students’ reason in an academically rigorous environment infused with faith. The result… a joyful learning environment that is transformative for students and their families.

Contemplation of truth fulfills a desire of the human heart for knowledge of God, and that knowledge in turn leads to knowledge of ourselves. As St. Augustine stated so beautifully in his Confessions, “Our hearts are restless until they rest in you, O Lord.”

Restless hearts are filled with joy when they continue in the love of Christ and obey him (Jn. 15.11).

It is no secret that religious belief is on the decline in the West. In the U.S., the average age children stop identifying as Catholic is 13! (Going, Going, Gone: The Dynamics of Disaffiliation in Young Catholics, 2018). An article at CatholicPhilly.com stated that since 1969, parish school enrollment in the Archdiocese of Philadelphia has declined 77% and high school enrollment 70%. Nationally, in the 1960s there were 5.2 million students enrolled in Catholic schools. Today that number is just about 1.8 million. In the last 10 years alone, Catholic elementary school enrollment has declined by 27.5% in the 12 urban dioceses (NCEA, 2018-2019 Annual Report).

Reading Fides et Ratio in 2019 is a different experience than reading it when it was published in 1998. The challenges to faith and reason that inspired St. John Paul II’s encyclical letter have advanced rapidly with devastating consequences for the wellbeing and faith of children, and for their parents. The statistics cited above are clear evidence that the sainted pope’s warnings about the future consequences of certain philosophical and theological trends were very real.

The letter is addressed to bishops to encourage them to bear witness to the truth in order to restore a genuine trust in Catholics’ capacity to pursue and know the truth. Further, he wished to draw attention to the distortion and denial of “certain fundamental truths of Catholic doctrine which… risk being distorted or denied.” (Fides et Ratio, #6). He warned that:

“Rapid and complex change can leave especially the younger generation, to whom the future belongs and on whom it depends, with a sense that they have no valid points of reference.”

Reference the statistics above and you will see he was correct.

Catholic liberal education and the restoration of faith and reason

We wrote in an earlier blog that the Regina Academies “form students in faith and reason so that they can be truly free, not enslaved to contemporary addictions like technology, radical individualism, materialism, or scientism that fail at every level to bring true freedom and happiness.”

These “isms” are the result of what St. John Paul II wrote are “various doctrines which tend to devalue even the truths which [in earlier times] had been judged certain. He continues,

A legitimate plurality of positions has yielded to an undifferentiated pluralism, based upon the assumption that all positions are equally valid, which is one of today’s most widespread symptoms of the lack of confidence in truth… everything is reduced to opinion” (Fides et Ratio, #5).

In the catechetical void of the last many years, perhaps this explains why only 7% of millennials who were raised Catholic still practice their faith.

“Reason, rather than voicing the human orientation towards truth, has wilted under the weight of so much knowledge and little by little has lost the capacity to lift its gaze to the heights, not daring to rise to the truth of being” (Fides et Ratio #5).

Regina Academies students learn that Truth can only be known in the person of Jesus Christ. That is why all subjects in our classical curriculum ultimately lead back to the incarnation. That is where we learn we are loved, discover our true purpose, the source of our dignity as human persons, and the unity between faith and reason that informs all subjects in the curriculum, from math and science to history and literature.

It is this education that led a 7th grade student at one of our schools to recently state with absolute confidence:

“God takes care of us no matter what. If we just follow his will, we will eventually end up in heaven with him, and that’s amazing.”

Under the patronage of the Blessed Virgin, the incarnational focus of the Regina Academy’s curriculum gives equal importance to faith and reason. That is why our parents say that JOY is the differentiating factor in a Regina education. It is the antidote for restless, youthful hearts.

What is Catholic Education? Its 2 Goals and the Path to a Joyful Life