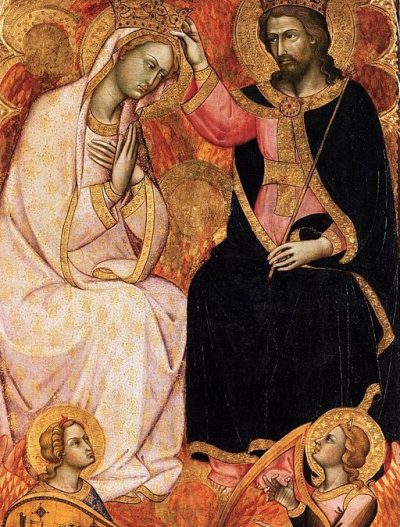 Celebrating the Feast Day of the Regina Academies

Today, August 22nd, is the Feast of the Queenship of Mary, the patroness of the Regina Academies. It is our feast day, and a good day to reflect on the origins or the feast, its continued relevance in the life of the Church, and the importance of gratitude for this great gift of our Queen in Heaven and her maternal protection of her children.

The Queenship of Mary

The Feast of the Queenship of Mary is a fairly young celebration in the Church. In 1954, During the early stages of the Cold War, Pope Pius XII wrote an encyclical called Ad Caeli Reginam (To the Queen of Heaven) establishing the feast to be celebrated by the universal Church. His motivation for proclaiming the feast can be found in the second paragraph of his letter and reminds us that 65 years later we still live with some of the same, and new, “moral evils” now. The Holy Father wrote:

Following upon the frightful calamities which before Our very eyes have reduced flourishing cities, towns, and villages to ruins, We see to Our sorrow that many great moral evils are being spread abroad in what may be described as a violent flood. Occasionally We behold justice giving way; and, on the one hand and the other, the victory of the powers of corruption. The threat of this fearful crisis fills Us with a great anguish, and so with confidence We have recourse to Mary Our Queen, making known to her those sentiments of filial reverence which are not Ours alone, but which belong to all those who glory in the name of Christian.

The world was far from stable following the end of World War II in 1945. Communism continued to spread, and the Iron Curtain fell across Europe dividing the ancient states of Central and Eastern Europe from the West, relegating them to communist control in Moscow. Berlin was divided, and the Soviets cut off all rail and road access to the sectors of the city under Western control. The result was the Berlin Airlift, an immense allied effort lead by U.S. General Lucas Clay to bring necessary supplies to the city for nearly a year.

The Soviets detonated their first atomic bomb in 1949, setting the stage for a nuclear standoff between the members of the newly formed North Atlantic Treaty Organization (NATO), and what in 1955 would become the Soviet response, the Warsaw Pact. Also in 1949, after a bloody civil war, the Chinese communist leader, Mao Zedong declared victory over the Chinese nationalists and established the People’s Republic of China sending the Nationalists fleeing to the island of Taiwan. In 1950 Mao and Stalin signed the Sino-Soviet Treaty, a formal alliance pledging the two nations to mutual defense for 30 years.

The same period saw alliances form between the Soviets and Vietnam, and the beginning of the Korean War as North Korea, backed by the Soviets, invaded South Korea that soon came under the protection of the United States.

All of this, along with riots against the communist government in East Berlin, CIA backed coups in Iran and Guatemala, Russia’s development of a hydrogen bomb and the increasing threat of a nuclear Armageddon set the stage for Pope Pius XII’s appeal to the Blessed Virgin as the Queen of Heaven in October of 1955.

In the face of such overwhelming international threats, where else could one turn? As we now face our own daunting challenges of peace between nations and our own internal cultural turmoil, where should we turn but to our Queen and our Mother in Heaven. It is she to whom Barbara and Paul Henkels turned in founding the Regina Academies as a means of forming children in wisdom and virtue to be her joyful children bringing her peace to a divided nation and anxious world.

As the Holy Father wrote in the conclusion to his letter:

By this Encyclical Letter, We are instituting a feast so that all may recognize more clearly and venerate more devoutly the merciful and maternal sway of the Mother of God. We are convinced that this feast will help to preserve, strengthen, and prolong that peace among nations which daily is almost destroyed by recurring crises. Is she not a rainbow in the clouds reaching towards God, the pledge of a covenant of peace? “Look upon the rainbow, and bless Him that made it; surely it is beautiful in its brightness. It encompasses the heaven about with the circle of its glory, the hands of the Most High have displayed it.”

Whoever, therefore, reverences the Queen of heaven and earth – and let no one consider himself exempt from this tribute of a grateful and loving soul – let him invoke the most effective of Queens, the Mediatrix of peace; let him respect and preserve peace, which is not wickedness unpunished nor freedom without restraint, but a well-ordered harmony under the rule of the will of God; to its safeguarding and growth, the gentle urgings and commands of the Virgin Mary impel us.

Queen of Peace, pray for us!