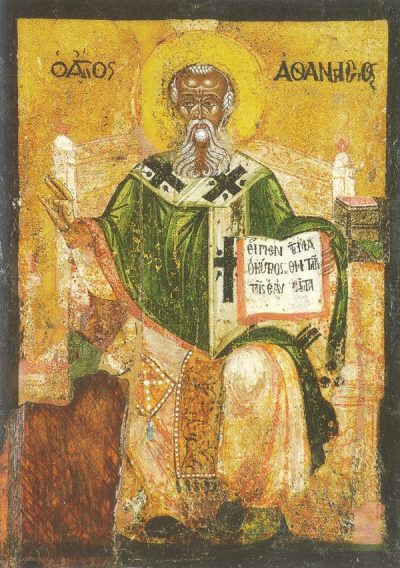 “God became man so that we might become God.” (St. Athanasius)

(On the Feast of St. Athanasius) On March 25, we began a series of posts to clarify what we mean when we say that the Regina Academies are Catholic classical liberal arts schools. Classical education is understood in various ways, and the Annunciation was the perfect day to begin this conversation about our classical education at the Regina Academies. We stated that, “the defining moment of human history, and the event that illuminates the mystery of humanity, [is] the Incarnation.” Therefore, it “is the curriculum of a Catholic liberal education.”

In our last post we also wrote that liberal education in the classical tradition has as its goal human freedom, and freedom comes from knowing the truth – the truth that we know through the incarnation of Jesus Christ.

Learn More about our Curriculum

Education and the formation of human persons

Of course, secular education has other sources for its curriculum that are based upon its assumptions of who children are and what they should become. Those assumptions are not rooted in the truth of who we are as human persons created in God’s image who are called to share in his divinity. A secular education’s “truth” is certainly not defined by the incarnation.

In our secularized world, truth has become relative, or a personal thing, no longer rooted in Jesus Christ. In secular schools, children’s spiritual nature is denied, so as Christians we know that it is flawed at the most fundamental level. It cannot acknowledge and nourish the soul’s need for truth.

Classical liberal arts education in the Regina Academies begins with the understanding that our first calling is to know, love, and serve God. Our relationship with God through Christ defines WHO we are – Christ’s adopted sons and daughters. Secular education focuses on WHAT a child will become.

A common definition of a classical education is that it is the cultivation of wisdom and virtue through the study of the liberal arts and the Great Books. Wisdom and virtue define WHO we are. It is our spirit, infused by God’s grace that defines our “who-ness.”

Beasts have minds and bodies and we train them to respond to us. Human persons also have minds and bodies, but also a spirit. Spirits are formed, not trained. Through the classical liberal arts curriculum at the Regina Academies, children are formed in the image of God who strengthens us in virtue, and imparts to us wisdom as the Spirit’s gift, leading us to charity.

This post has a provocative title. The quote of St. Athanasius, “God became man, so that we might become God” brings to a personal level why a curriculum built around the incarnation is so important. What greater opportunity could you or I have in our lives than to “become God?”

This concept of man becoming God, called divinization in the Eastern Church, makes many western Christians uncomfortable. However, even St. Thomas Aquinas presented this idea in one of his small works that is quoted in the Catechism of the Catholic Church. He wrote that “The only-begotten Son of God, wanting to make us sharers in his divinity, assumed our nature, so that he, made man, might make men gods.” (CCC 460)

More Information about our Schools

The offertory of the Mass also uses this text (which is actually from 2 Peter 1:4). When the priest is preparing the bread and wine for consecration, he prays: “By the mystery of this water and wine may we come to share in the divinity of Christ who humbled himself to share in our humanity.” The liturgical gesture of the priest is intended to remind us that just as a drop of water vanishes in a chalice of wine, but its essence remains, we become assumed into Christ’s divinity, retaining our human essence.

Growth in wisdom and virtue

One can only be truly free if one is truly wise. Wisdom is the cardinal virtue that allows us to discern our true good in every circumstance and to choose the right means of attaining it. It leads the mind to know truth in the person of Jesus Christ where we find his invitation to be assimilated into his divine being by living in him. With this first obligation firmly in place, we move on into life’s professions with joy and purpose.

In the classical liberal arts tradition, wisdom and virtue are formed through the great works that have been produced out of the cultural heritage of the Christian west. We’ll talk more about the value of those “Great Books” in a later post, but for now, it will suffice to say their value is that they are the best materials on which the human mind can work in order to gain insight and understanding into the nature of being human.

At the Regina Academies, we trust what has been proven over the centuries, that a Catholic, classical liberal arts education is the best way to form the human intellect, and the path that will lead our students to lives of virtue strengthened by the spirit and nourished by truth. Our prayer is that ultimately, it will gain for them their share in the divinity of Christ – their divinization.

Notre Dame is mine… and yours…