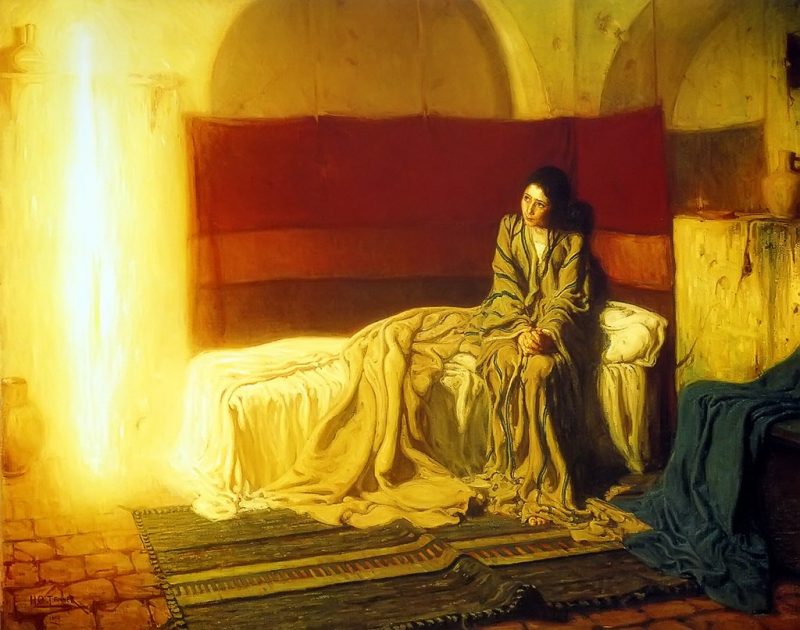 Today, March 25, the Church celebrates the feast of the Annunciation, the moment when the Angel Gabriel came to visit the Blessed Virgin Mary in Nazareth and invited her to fulfill her role in salvation history by becoming the Mother of the Redeemer, Jesus Christ.

As Catholics, or other christians, we might think that the Incarnation is strictly a Christian event. While the Incarnation of Jesus Christ does define christianity, Jesus came to redeem the whole world – not only those who believe in him. God coming to dwell among us as a man, therefore, is the defining moment of all human history. It is an echo of the creation of man, the fall, and the human struggle to reclaim the promise of our future glory in the new Adam, Jesus Christ.

The Redeemer of Man

In his first encyclical letter, Redemptor Hominis (The Redeemer of Man), Saint John Paul II set the tone for his papacy by quoting from the Second Vatican Council’s Constitution on the Church in the Modern World, Gaudium et Spes. He so beautifully wrote that “only in the mystery of the Incarnate Word does the mystery of man take on light.” That “mystery” is the mystery of all of humanity who are created in the image of God. Not just Christians.

As the defining moment of human history, and the event that illuminates the mystery of humanity, the Incarnation is at the center of a Catholic liberal education. It is important to not confuse the term liberal with the way it is now commonly associated with a political perspective. A liberal education in the classical sense has as its goal human freedom. Jesus himself told his disciples – and us – that if we know him, we will know the truth, and the truth will make us free… veritas liberabit vos in Latin (Jn. 8.32). The second person of the Holy Trinity, the Incarnate Word, came to lead us to truth. The pursuit of Jesus Christ who IS the truth that sets us free is the goal of a classical liberal arts education.

Once again, Saint John Paul II, reflecting on these words from St. John’s gospel, said that they contain “both a fundamental requirement and a warning: the requirement of an honest relationship with regard to truth as a condition for authentic freedom, and the warning to avoid every kind of illusory freedom, every superficial unilateral freedom, every freedom that fails to enter into the whole truth about man and the world.” (RH 12)

The classical curriculum of the Regina Academies is focused on guiding students to an honest relationship with the Truth. We form students in faith and reason so that they can be truly free, not enslaved to contemporary addictions like technology, radical individualism, materialism, or scientism that fail at every level to bring true freedom and happiness.

The partial truths or false truths taught in most schools promise the illusory freedoms St. John Paul II warns us about. They rob children of the whole truth about themselves and the world around them. We can see the result all around us in the despair and confusion so evident in our culture.

Jesus Christ is at the center of the Regina Academies because he is the true master teacher. Whether the subject is math, science, literature, music, grammar or logic, Jesus Christ is there because, “Through him all things were made; without him nothing was made that has been made. In him was life, and that life was the light of all mankind.” (Jn 1.3,4)

In the Regina Academies, science inspires wonder at God’s creation, math reveals the truths and patterns that define the order of all things, literature uncovers the inner depths of the human spirit, and logic forms the rationality of thought that is unique to human persons created in God’s image. All subjects flow from and ultimately lead back to the Incarnation.

The Feast of the Annunciation celebrates the Blessed Virgin Mary’s “yes” to God. She is the protector and advocate for the Academies to ensure and inspire the truth proclaimed by her son.

Mary’s example shows us that “yes” is a very powerful word when it is a response to an invitation from heaven. In fact, it can change the world! The goal of the Regina Academies’ classical education is to form students to know when to say yes to authentic truth, and when to say no to the promise of illusory freedoms based on false or partial truths.

The WHY of Classical Education

What is a Catholic Education? Its 2 Goals and the Path to a Joyful Life